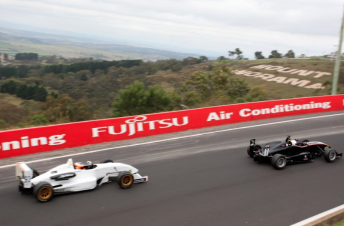 F3 will kick off its championship at Mount Panorama

The Formula 3 Australian Drivers Championship has announced a seven-round national championship, plus a beefed up television package for the 2013 season.

The event coincides with the 75th anniversary of the first race meeting held at the famous Bathurst circuit. Formula 3 organisers are said to be working with the Motor Festival promoters to include a Gold Star heritage aspect to the celebrations.

Formula 3 management will also christen a new trophy to be awarded to the round winner that links in with the circuit’s Gold Star past.

From Bathurst, the championship will support the V8 Supercars at Symmons Plains (a week after Bathurst) and the third-annual City of Darwin F3 Cup at Hidden Valley Raceway.

The second half of the season will see the F3 rejoin the Shannons Nationals bill, with the remaining four rounds run at Sydney Motorsport Park, Queensland Raceway, Phillip Island and the finale at Sandown.

An increased TV package has also been confirmed, with each Shannons Nationals-based round to feature 30-minutes of coverage on SBS Speedweek, repeated on SPEED TV Australia – up from the previous 20-minute package.

Each round with the Shannons Nationals will also be streamed live on the internet by the series’ online broadcasting package.

A separate TV package is yet to be locked in for the Bathurst season opener.

See below for the 2013 Formula 3 Australian Drivers’ Championship calendar