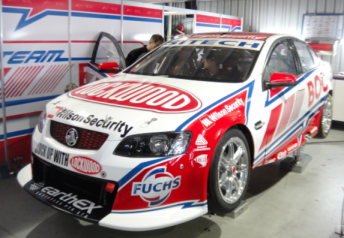 The first BJR COTF Commodore will hit the track today

Brad Jones Racing will shakedown its first Car of the Future Commodore VE at a driver training facility in Wodonga, Victoria today.

The three-car V8 Supercars team has completed the build of its first COTF, with its second and third Commodores not too far behind.

As seen in the images supplied by BJR, the first car is resplendent in 2012 Team BOC colours. The team says that the look of the 2013 car will change ahead of the new season.

The shakedown will be followed by the car’s first test at Winton Motor Raceway on January 15. The team will only test one of its 2013 COTFs. The other cars will hit the track close to the official pre-season test at Sydney Motorsport Park on February 16.

BJR is the last of the ‘Accredited Manufacturers’ to debut their Commodore V8 Supercars under the new regulations, but team manager Chris Clark was proud of the effort of the Albury-based team to get the first of its cars completed.

“The boys have done an amazing job, working all over the Christmas and New Years break,” Clark told Speedcafe.com.

“Our production manager David Moris-Fontes has worked very hard on the job, as has all of the other team members. They’ve kept pushing it along, doing a lot of hours and getting us to where we are now.

“The shakedown should be seamless. The MTA has got its own small track. It’s only 1.6km, but for what we need, it will be perfect. It’s quite a nice little track and very close to our workshop.”