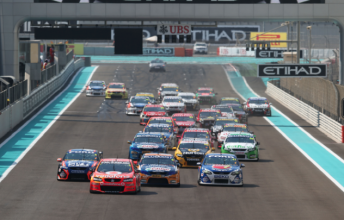 The Yas Marina Circuit looks set to be dropped from the 2013 V8 Supercars Championship calendar, Speedcafe.com can reveal.

After acting as the main support category to Formula 1 at the Abu Dhabi Grand Prix last year, the V8s is likely to lose its place on the event card after Formula One Management confirmed that the GP2 and GP3 categories will be the primary support acts at the November 1-3 meeting.

A V8 Supercars representative told Speedcafe.com that they were still to be officially notified of any changes to this year’s event and could not comment until discussions are held with the Yas Marina Circuit officials.

The demise of the V8 race in the United Arab Emirates will leave the V8 Supercars with a 14 event championship, unless the Abu Dhabi event could be either moved to a new date or replaced by another event, similar to last year’s unnamed international fixture that was replaced by Sydney Motorsport Park.

The news is likely to be seen as a positive for the V8 teams themselves, as the event was to be held one week after the Armor All Gold Coast 600.

The V8 Supercars have competed at the state-of-the-art Yas Marina Circuit since 2010.

The 2010 and 2011 meetings were held as the opening events of the V8 Championship, with the V8s acting as the main racing class on both occasions. Both races were run under lights.

Last year, V8s shifted to a November race date, supporting the Formula 1 World Championship. Due to F1 track restrictions, the V8s were left with a very limited track schedule, culminating in three 12 lap sprint races with no pit stops.