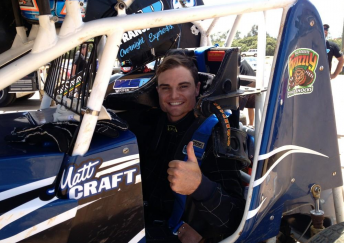 V8 Supercars standout Tim Slade and a group of racing celebrities and media have sampled Sprintcars at Sydney Speedway today.

While most of the drivers at Parramatta were speedway virgins, Slade is no stranger to Sprintcars having competed in selected 360 Series events three years ago. He says that the sport of speedway racing is one of the most exciting forms of motor racing.

“It was great fun to get back aboard a Sprintcar,” Slade told Speedcafe.com.

“Sydney Speedway and the whole Sprintcar fraternity want the sport to get it back to how it was back in the day, which is why they have held this drive day today.

“And to be honest, the competition at the elite level in Australian Sprintcar racing is very tough.

“As far as the competition and numbers go, the racing is actually very good and the field is as strong as ever.

“The sport is as good as ever, but they’re all looking to get the crowds back through the gates. The big names like the Tatnells, Dumnesys and Farrs are all still there, but there’s a lot of young guys coming through which is good to see.”

The local Sprintcar season is in full swing at the moment, with the Australia Sprintcar Titles being held at Archerfield in Queensland this weekend.

CLICK HERE for Speedcafe.com’s review of the prelude at Archerfield.