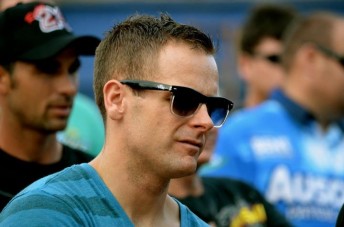 Ian Madsen has continued his good form this summer to take victory in the $10,000 to win Capalaba Wreckers Sprintcar Cup at Supercheap Auto Archerfield Speedway, right on the eve of the Australian Sprintcar Title.

Madsen took out the feature against a star-studded field that included World of Outlaws Champion, Donny Schatz and fellow Outlaws Tim Kaeding and Jason Sides, along with a host of Australian competitors getting accustomed to the tight Brisbane layout ahead of this weekend’s three night Australian Championship.

The early leader was Louisiana’s Jason Johnson, before Madsen was able to run him down on the eighth circulation and take the lead. From there, he was able to dice his way through traffic to take a win by 1.5 seconds.

Johnson drifted to third placing late in the race when James McFadden elevated himself to second. Robbie Farr finished fourth with Sides rounding out the top five.

Schatz had a disappointing end to his 2012/2013 Australian campaign. A quarter of the way through the feature he rode the cushion and crashed into the turn three wall. Other notable non-finishers were Garry Brazier, Cameron Gessner and David Murcott.

The Australian Sprintcar Title begins tomorrow night at Supercheap Auto Archerfield Speedway in Brisbane with racing continuing through Friday and into Saturday’s finale.