Carlos Sainz in trouble on Dakar

Carlos Sainz in trouble on Dakar 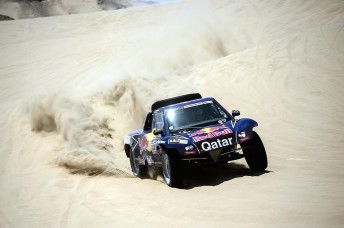 Carlos Sainz has lost hours on the fourth stage

The challenge of Carlos Sainz at the Dakar Rally is all but over after the 429km fourth stage from Nazqa to Arequipa in Peru.

Driving a two-wheel-drive buggy, Sainz lost many hours in the in the Peruvian sands with mechanical issues to fall to 24th overall. Also encountering issues was Robby Gordon who rolled and lost several hours in the process. The day soon became a nightmare as well for Lucio Alvarez, when he broke down after 28 km. As a result, he can say goodbye to the third place in the general standings that he had been occupying.

Sainz team-mate Nasser Al-Attiyah had no issues and despite being the first car on the road, was never headed to set his second-straight stage win. The Dakar winner from 2011, the Qatari picked up his 16th stage win. Stéphane Peterhansel maintained a steady pace to be 77 seconds behind Al-Attiyah, but maintained his five minute advantage in the overall standings.

“They were not easy dunes and it was very difficult to open the road, but we are so happy to finish today without any problems or mistakes,” said Al-Attiyah

“I’m so happy to be close to Peterhansel. The car is working very well and I’m quite happy”. 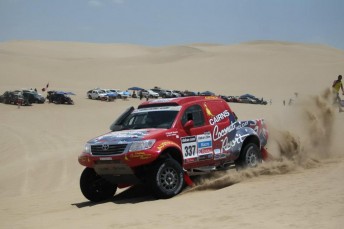 Australia’s Geoff Olhom was 14th on the stage and is now knocking on the door of a top-10, sitting 12th outright. Bruce Garland has his Isuzu in 43rd position, while team-mate Adrian Di Lallo is 52nd.

On two wheels Joan Barreda-Bort hit back after a damaged wheel saw him finish 44th yesterday. The winner of the second stage overtook 15 riders on the road, to pick up the best time for the third time in his career. His finishing time over eight minutes quicker than new overall leader Olivier Pain, who hauled himself up from fourth place in the general standings.

Four-time winner Cyril Despres opened the way, but chose to ride in a restrained manner, at the cost of dropping back in the general standings. Though he moved back to third overall, his eyes could be more focussed on Barreda-Bort behind, than Pain out front.

“After a bad day yesterday, when I broke the spokes of my wheel and lost heaps of time, I rode very well today,” said Barreda-Bort.

“I started from far back and was able to go on the attack from the beginning to the end.

“Nothing is lost yet, so I’m going to fight every day to move back to the front.”

In the quad race, Marcos Patronelli won his third consecutive stage. He seems to have found a consistent rival in Sebastian Husseini, the only rider to be less than an hour behind him after the first four stages.

In the truck category, Gerard De Rooy’s is no longer going solo out in front. The title holder encountered mechanical problems and two punctures, as well as some driving mishaps, getting stuck in the dunes for a prolonged period. In total, he lost almost half an hour on the day’s special stage, losing the command of the race to Ales Loprais by just 56 seconds overall. A genuine battle looks to be on the cards, because in addition to the Czech driver, the road to Arequipa saw the return to form of the Kamaz trucks. Eduard Nikolaev put his on the provisional podium, while Ayrat Mardeev, who won his first special stage on the Dakar, is in fourth.