V8 SuperTourers move closer to love and peace with MotorsportNZ

V8 SuperTourers move closer to love and peace with MotorsportNZ 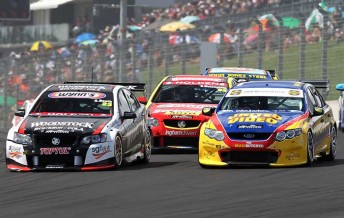 MotorsportNZ is working constructively with the rebel V8 SuperTourer category at finally recognising it as a properly sanctioned national Championship.

The governing body of NZ motor racing indicated it would help V8ST reach its goal of being officially sanctioned in the coming weeks before the series kicks off its second season in mid-February at Hampton Downs.

At a specially convened peace meeting in Wellington between MotorsportNZ, V8ST and NZV8s, all parties agreed that a sensible approach was being pursued at peace and unification.

“This was a very positive and productive meeting which has resulted in all three parties working together for the betterment of the classes involved,” MotorSportNZ president Shayne Harris said.

V8ST and the MotorsportNZ-run NZV8s were also seeking reviews of their calendars from the 2014 season as a resolution looked close to finally bringing an end to the ugly fracture in domestic V8 racing.

“V8 Supertourers indicated that they would like their rules and regulations to be sanctioned and the sport will work with the category over the coming weeks with the objective to achieve that,” Harris said.

“The meeting was friendly, frank and constructive. We are now very confident that all three parties can work together for the betterment of motor racing here in New Zealand,” Petch said.

Greg Lancaster, the newly elected chairman of NZV8s Greg Lancaster said that he was ‘very pleasantly surprised’ with the accords reached on a number of substantive issues. “A major objective of my board, the return to a unified premier racing series, has been agreed in principle.”

The parties have agreed in principal on all fronts and over the next few weeks the details will be worked through with the aim being a closer working relationship for the benefit of motorsport in New Zealand.

The difficult question of how NZV8s will fit into the 2013 schedule and how it will marry with the V8 Challenge Cup is yet to be disclosed.