Dakar battle heats up in Peru

Dakar battle heats up in Peru Nasser Al-Attiyah has won the third stage of the Dakar Rally, the 243km leg from Pisco to Nazca, while Stephane Peterhansel continues to lead the field.

After dropping a swag of time on the previous day due to a navigational beacon failure, Al-Attiyah’s team-mate Carlos Sainz was given time back by officials and he was first away. However, the former WRC star’s day quickly headed south with electrical issues which cost him over 30 minutes. The Qatari started in seventh place and went on to overtake all those in front of him except for Peterhansel. It was a great day at the office for Al-Attiyah, who climbed from seventh to second overall behind Peterhansel.

“We won the stage and clawed four minutes back from Stéphane,” said Al-Attiyah.

“And it could have been even better, but we stopped for a couple of minutes to help Carlos. It looked like he was having problems with the electronics and the engine cut-out, and since we couldn’t do anything to about it, we kept going and didn’t see any more cars until the finish line.

“The sand was very soft today and I decided not to go flat out because the car’s very new and we still don’t know how far it can go. No problems so far.”

After issues on the opening day, former NASCAR and Indycar star Robby Gordon set the second fastest time, but is over 46 minutes off the lead.

A good day for Australia’s Geoff Olholm who set the 11th fastest time for the stage and is now 18th overall. Bruce Garland continues his steady run to be placed 42nd, while Isuzu team-mate Adrian Di Lallo is 61st. 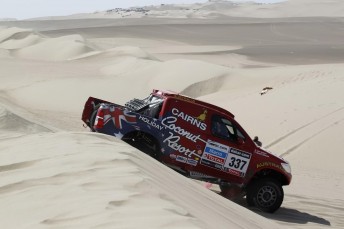 In the bikes Francisco López started in 30th place, but by the time he got to Nazca he’d already left almost 20 other riders in the dust to scores his second stage win in three days.

“The stage was very different from what we went through during the first two days,” said López.

“I started from afar and went flat out throughout the stage in an attempt to catch up with Cyril Despres, which I think I managed to do. I focused on navigating and finding the waypoints, and everything went well.

“But tomorrow’s stage will be different at the front of the race, so I’m taking things one day at a time.”

Leading the field can prove costly and yesterday’s heroes became the day’s losers. Joan Barreda and his Husqvarna team, which included Australia’s Matt Fish, dropped massive amounts of time as leaders on the road. Barreda had technical issues and with Fish part of the team as the ‘water carrier’ he had to stop and assist the team leader. The end result was that the Aussie fell from fifth outright to 31st behind countrymen Rod Faggattor and Todd Smith.

In the quads Marcos Patronelli grabbed his second stage this year despite having to deal with a slowly deflating tyre which forced him to slow down 30 km from the finish! The Argentinean driver is over 21 minutes ahead of Sebastian Husseini.

Only one driver has managed a hat-trick of wins in this year’s Dakar, and it’s none other than Gerard de Rooy. The Dutch truck driver’s flawless performance inspired teammate Miki Biasion to a third place finish. It also was the first time in the 2013 Dakar that the Kamaz team managed to put one of its trucks in the top three.

Tomorrow, the Dakar field will leave Nazca for a 288km timed special stage and a massive 429km of liaison before the overnight bivouac at Arequipa, Peru’s second largest city.