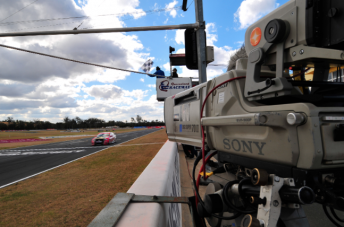 The long-awaited V8 Supercars television rights is expected to be sorted this week, ending a drawn out saga that has raised concern within the industry.

According to a television insider, current rights holder Seven is responding to an offer on the table from a rival network, believed to be Ten.

With a final right of reply, Seven remains in the box seat to retain the broadcasting rights of Australia’s premier motor racing category.

It is understood that Nine, who showed interest in the series early in negotiations, has dropped out of the rights race due to its heavy $1 billion investment in the NRL, plus a looming battle to retain the cricket rights next year.

The deal is understood to be for just a two year duration, with V8 Supercars hoping a shorter deal will see them placed in a better negotiating period in 2015.

If Ten is to challenge Seven, it is likely that its offer would be over a longer five or six year term.

The new V8 TV package is expected to include a heavy subscription TV component with Foxtel’s Speed Channel.

According to the majority of Speedcafe.com readers, a switch to Ten would a welcome change. Of the 3000 voters in the current Pirtek Poll, over two-thirds of viewers would like to see former V8 broadcaster Ten take the rights back from Seven.

The ‘No TV deal’ saga has dragged into the new year as V8s has looked for the best possible financial outcome, but due to declining advertising revenues and the billion dollar deals for AFL (Seven) and NRL (Nine), the spend-thrifty networks have been keeping a close eye on extra sports broadcasting expenditure.

V8 Supercars CEO David Malone was tight-lipped when contacted by Speedcafe.com but confirmed that more than one network remains in the race, and that a final decision is imminent.

“It is drawing nearer to a conclusion.”

The opening event of the V8 Supercars Championship will be held in Adelaide on February 28-March 3.