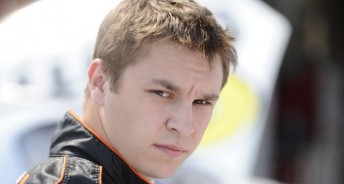 Kevin Swindell will return to Australia this month

Kevin Swindell, the 23-year-old son of legendary Sprintcar racer, Sammy Swindell, will make his debut at the Grand Annual Sprintcar Classic later this month after signing a deal with Domain Ramsay to pilot one of his Essendon Ford supported cars.

The youngster, who made his NASCAR Nationwide debut during 2011, will race at Avalon Raceway’s President’s Cup, the King’s Challenge at Mount Gambier and the two night Grand Annual Sprintcar Classic at Warrnambool.

He will line up alongside Ramsay as the team expands to run two cars.

“We have new Maxim Chassis and KRE engines ready to go. Recently we got pretty keen to do something like this to not only help Domain and the team win races. He is not coming here on holiday,” said David Dickson – Principal of Essendon Ford.

Swindell will this weekend try to create even further history when he aims to become the first driver to win the Chili Bowl Midget race four years in succession.