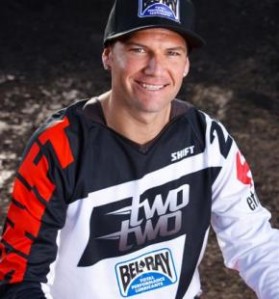 Australian Chad Reed has finished fourth in the opening round of the 2013 Monster Energy AMA Supercross at Anaheim’s Angel Stadium.

The TwoTwo Motorsports rider started fifth in the 450 SX Main Event, keeping pace with the front-runners over the opening laps.

While the first four started to pull a gap, Reed continued to lap consistently and moved up into fourth after Justin Barcia fell on Lap 17.

The race was won by Davi Millsaps, with Trey Canard second and Ryan Dungey third.

Reed said it was important to start the season with a good point scoring result.

“We have come away with some good points tonight but I wasn’t entirely happy with my result.” Reed said.

“There are 16 races ahead and tonight was about seeing where we all stacked up.  I wanted to come away with some good points and we achieved that.

“It is great to have the first race in the can, we now know what work we have to do ahead of Phoenix.”

The second round of the 2013 Monster Energry AMA Supercross will be held at Phoenix Chase Field next week.