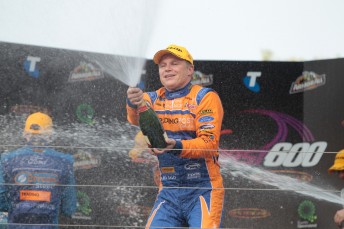 Ford Performance Racing co-driver  and ex-grand prix ace Mika Salo will continue his association with Australian motor racing by making his debut at Bathurst next month.

Salo, who competed in 109 F1 grands prix, confirmed his participation in the Liqui-Moly Bathurst 12-hour from February 8-10 via his Twitter account.

While he did not make mention of the team he will be driving for, fellow 12-hour driver Allan Simonsen replied by welcoming Salo to the team which is almost certainly Maranello Motorsport’s Ferrari 458.

Salo, who combined with Will Davison to win Race 23 at the Armor All GC600 meeting last year for FPR, is excited about having a crack around the Mount Panorama circuit.

The 458 Ferrari, which set the 12-hour lap record last year, is one of the outright favourites for the event which has attracted the strongest field in its history.

Salo is the second ex-Ferrari F1 driver to race in the 2013 edition of the Bathurst 12-hour with Italian Ivan Capelli confirmed as one of three drivers in a Chevrolet Corvette GT3 for Trofeo Motorsport.

Aside from his F1 days, Capelli is no stranger to Australian tracks having performed laps in competition Maseratis before at Victoria’s Winton circuit.