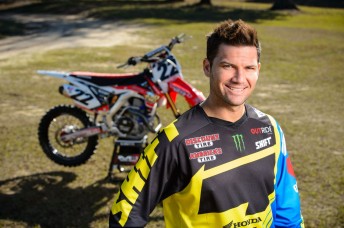 Superstar rider Chad Reed is confident and refreshed going into the opening round of the 2013 Monster Energy AMA Supercross at Angel Stadium in Anaheim.

TwoTwo Motorsports rider Reed was sidelined for six months before returning from his horrific Dallas crash in the Monster Energy Cup last October.

He has also contested three rounds of the Australian Supercross Championship since returning from injuries which included a torn anterior cruciate ligament, broken tibia and fibula, two fractured ribs and a broken T6 vertebrae.

Reed is confident he is armed with enough preparation in readiness for his 11th season in the high profile AMA Supercross series.

The Honda rider will be aiming for a seventh win at the Californian stadium which is the first of 17-rounds.

“The knee is good,” Reed declared. “The time off the bike gave me a great opportunity to spend time with the team and strengthen our inner workings.

“We are a better race team now. I am excited for the new season and I feel like we are really ready to go.”