Entries flood in for Kumho tyres 300

Entries flood in for Kumho tyres 300 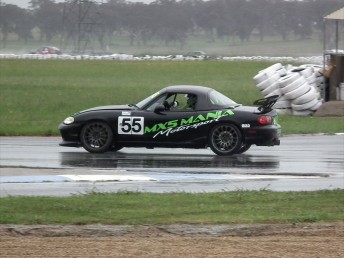 Entries flood in for the Kumho Tyres Wakefield 300

More than 50 entries were lodged in the first 36 hours after entries opened for the 2013 Kumho Tyres Wakefield 300.

The popularity of the events at the Goulburn-based Wakefield Park facility and at the Winton track in north-eastern Victoria continues to be strong with organisers overwhelmed by the response.

“I cannot believe the response to the Wakefield 300. Five years ago the event was basically dead and Steven Godfrey asked us to consider running it again,” event manager Matthew Ronke explained.

“(now) it has national TV and a terrific sponsor in Kumho and I have been working tirelessly to make it a success.”

From the 56 entries received there are 30 different types of car which will be handled by 112 drivers at the Wakefield Park event from March 2-3.

Among those received is the Mitsubishi Lancer Evo 9 with Jake Shelley nominated as the only driver to date.

The most popular entries are the Mazda MX5 roadsters which total 16 and are headed by the Natsoft/MX5 of David Raddatz and Shane Otten, who both have sound records in 300km races.

Steve Anslow will be among the leading contenders in his Chev V8-powered Mazda RX7 and will have the help of Queensland co-driver Lindsay Stone in the QualityRacing.co.au entry.

The Victorian-based Tampered Motorsport has entered four cars two of which are a Chev V8-powered Volvo 740 for Adam Ronke and Warren Sheehan and a Mazda MX5 for Jeff Phillips (Townsville) and Terry Nightingale (Bathurst).

Shepparton’s Richard Renato will handle a Volvo 540 which is powered by a 2-litre turbo while a Proton Satria, which won its division in the 2012 Winton 300, will be driven at Wakefield Park by brothers Shane and Glen Baker.

Returning is the quick BPG Racing Nissan Skyline R33 for the father and son combination of Adam and Craig Burgess while Andrew McPherson has entered his Imak Lotus Exige which he will share with double Australian Formula Vee champ Ben Porter.

The 2013 event that will cover 173-laps co-incides with Goulburn’s 150th anniversary celebrations with a special award to be given to the leader at the 150-lap mark.