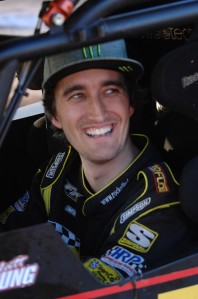 Being dished up a fairly slick track, Holder acquitted himself well behind the wheel of the brutal 950 horsepower machine.

He lapped a few seconds behind the late time trialists in an impressive exhibition.

“It was a fantastic opportunity,” Holder told Speedcafe.com

“It was more difficult than it looks and the power these things have is unbelievable. From the grandstand, the track appears really smooth, but there are holes and bumps and ruts that you don’t see.

“Being out there with 20 other guys would be a real experience and I’ve got a much better appreciation for what I’ve watched these guys do from the hill for many years.”

After earlier riding in the track’s two seat Sprintcar, Holder admitted when it became time to strap himself behind the wheel that he felt some trepidation.

The Holder family were guests of Sydney Speedway for the NSW Sprintcar Title and a fan meet and greet on Friday night. Holder signalled the drivers for the four wide salute to the fans and then waved the green flag for the Sprintcar feature.