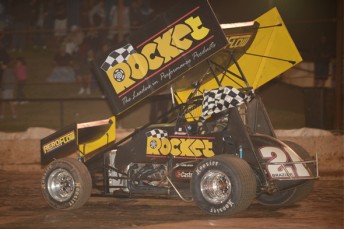 Garry Brazier put on a sensational display to be awarded his seventh New South Wales Sprintcar Title at Sydney Speedway, securing the lead late in the race.

The Sydney driver started deep in the pack aboard his Rocket Industries machine.Up front, last start winner, Ian Madsen quickly moved into the lead with Trevor Green in strong pursuit.

A mid-race caution for diminutive American racer, Rico Abreu in his Abreu Vineyards machine gave Brazier the impetus to get the #21 to the highline and move forward.

He quickly disposed of those around him before getting on racing terms with Madsen.

Brazier stuck to the highline whilst Madsen went low, once Brazier swung to the lead, he would use lapped traffic to his advantage and take a comfortable win in the end from Madsen, Green, American World of Outlaw, Joey Saldana and Max Dumesny.