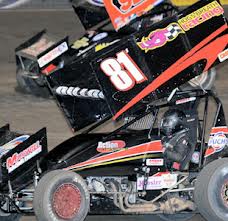 He had won the B-Main and then had to come from the eighth row to secure a second successive victory in the 35-lap main event.

The double victories see Dillon head the championship points on 640 with Lines second on 568 while Robbie Farr is third on 522.

Farr finished fourth in the ECP #7 Maxim, ahead of the Californian Kyle Hirst who is now more than 200 points adrift of Dillon on the points ladder.

Top 10 after round two of the ENZED World Series Sprintcars