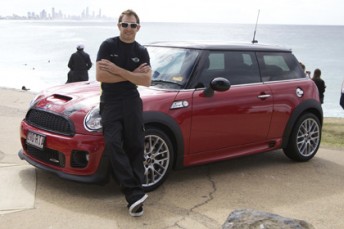 Australian Chris Atkinson has ranked in the top 15 rally drivers in the world in confirmation of his ability on the international stage.

In freshly released rankings promoted by the International Rally Drivers Association, Atkinson occupies 14th position despite only having had limited opportunities in the 2012 World Rally Championship.

In October Atkinson secured his first major international rally championship by winning the Asia-Pacific title in an MRF Skoda.

Atkinson had his first 2012 WRC start in a Ford Fiesta as part of Ken Block’s Monster World Rally Team in Rally Mexico and then stood in for Nasser Al-Attiyah at the wheel of the Citroen DS3 at the Finland Rally with regular Qatar World Rally team driver Al-Attiyah representing his country in shooting (won the bronze medal) at the London Olympics.

The 32-year-old Aussie then replaced Armindo Araujo in the factory-backed WRC Team MINI Portugal for the remaining five rounds of the WRC where he accumulated points in four of those rallies.

He did a splendid job in equipment that was clearly lacking against the top flight teams, none-the-least the Citroen squad of Sebastien Loeb and Mikko Hirvonen.

Atkinson managed to finish with 28 points, the same as Al-Attiyah and finish 13th overall despite competing in only seven rounds of the 13-event WRC.

His plans are unclear for 2013 after the BMW Group, custodians of the MINI brand, confirmed several months ago that it would pull support of the Works WRC Team Mini Portugal.

The official rally rankings were topped unsurprisingly by Loeb ahead of his 2012 Citroen team-mate Hirvonen.

The rankings include 1026 rally drivers from five continents and 79 countries from all of the international rallies on the 2012 FIA calendar.