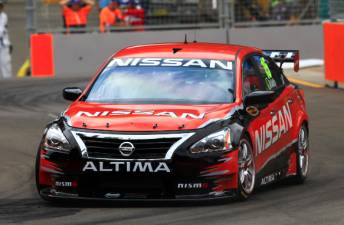 The all-new Nissan Altima V8 Supercar has had its first official track test at Winton Motor Raceway this week.

Held under a veil of secrecy, the first of Nissan Motorsport’s new Altima’s conducted a full day at the rural track, with team owner/driver Todd Kelly reporting a trouble-free day.

Rick Kelly completed the bulk of the testing laps, while Speedcafe.com understands that new team signing James Moffat also cut laps in the first of the team’s four Altimas.

Todd Kelly remains unable to test at this point while he recovers from shoulder surgery, but was pleased with the car’s performance and reliability.

“The test was perfect. The car was good straight out of the box and we had no issues with it at all,” Kelly told Speedcafe.com.

“Rick did quite a few laps. He went crazy at the end. We told him to try and break it and treat it like a qualifying run at Clipsal, bouncing off kerbs and stuff, and he couldn’t believe how well it responded. He reckons it was the best car he had ever driven.

“For the very first day, to have no teething problems, it was very encouraging.”

The test was run with a hydrid aerodynamics package that according to Kelly gave the car the same amount of aerodynamic downforce as the final kit that it will present at the cars homologation aero test next month.

“The set-up we had aero-wise gave us the correct amount of downforce, but isn’t the final configuration that the car will be in,” he said.

“At Winton, we ran a version that produced the same amount of aero that we need. We’ve got final homologation of the aero package in early January, so we’re currently producing a different version of aero pieces for that.”

Kelly says that the team’s second and third cars are all-but complete, while the fourth car is due to hit the paint shop before the new year.

“We’ve got the second two painted and being assembled as we speak,” he said.

“The final car is coming out of the fabrication shop now. We’ve missed out by two days of having all four of the cars painted by Christmas. Everything is pretty good.

“The next big thing is the engine specification signed off, which will come early in the new year.”

The four Nissan Altimas will be driven by Rick and Todd Kelly in Jack Daniel’s Racing colours, while the team’s other two cars will be steered by Moffat and former Garry Rogers Motorsport driver Michael Caruso.