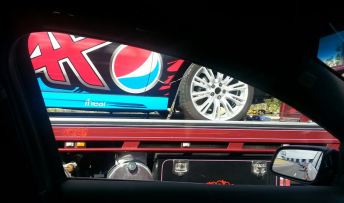 The Falcon show car was heading north of Melbourne on the back of a tow truck, uncovered, and was spotted by V8 Supercars endurance driver Cameron McConville.

McConville, who hosts Speedcafe.com’s Castrol EDGE Summer Grills, snapped an image of the car driving along the highway and tweeted it to his followers via his account @CamsCorner.

The image reveals some of the new-look that the factory Ford team will carry in 2013.

The Pepsi Falcons will be driven by Mark Winterbottom and Will Davison next year and appear to be blue and black across most of the car.

The car pictured had prominent backing from Castrol and WesTrac with ‘Davison’ written on the rear window of the car.

Pepsi and FPR announced earlier this month that they would join forces in 2013, with the full livery of the cars to be revealed in Melbourne on Thursday, February 7.

CLICK HERE for the announcement of Pepsi joining FPR.