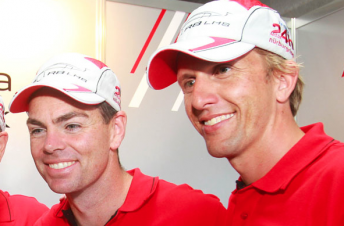 V8 Supercars hero Craig Lowndes and his Triple Eight endurance team-mate Warren Luff will return to Mount Panorama in February for another assault together on the Bathurst 12 Hour.

Lowndes and Luff will team with two-time 12 Hour winner Rod Salmon, who has recently secured the Audi R8 LMS GT3 that won last year’s race in the hands of Phoenix Racing.

The car will be run by Melbourne Performance Centre and is currently being updated to Audi’s 2012 homologation ‘ultra’ package. The team will enjoy support from the Audi Sport Customer Racing program.

Lowndes regular Triple Eight engineer Jeromy Moore will join MPC for the event, and he hopes the new combination will put him in a position to secure his first win in the 12 Hour race.

“I am very happy to be stepping back aboard an Audi R8LMS with Warren again, and to have a chance to be back in outright contention for another Bathurst win is fantastic,” Lowndes said.

“I’ve enjoyed my two outings with the factory Audi team at Bathurst in the 12-Hour. The guys at Melbourne Performance Centre have been involved with the factory cars all the way, and they – along with Rod Salmon – gave me the chance to race at Phillip Island in September and finally taste victory.

“I know how good the car is, and how good the team are, so I have every confidence that we’ll be right in the mix in February.”

Luff too was enthusiastic about the team’s chances.

“I’m really excited to be joining Craig again, this will be our third 12-Hour together,” Luff said.

“The R8 LMS has been the car to beat at Bathurst for the last two years, and while we will be competing against the most competitive field in 12 Hour history, we have a great package and some great drivers.”

MPC will field two R8s for the Bathurst 12-Hour – one for Salmon, and the other for Mark Eddy – plus as many as five customer cars with entries from Peter Conroy and Dean Koutsoumidis joining international entries from United Autosports (UK), Pheonix Racing (Germany) and Dragonspeed (USA) as part of the Audi Sport Customer Racing program.