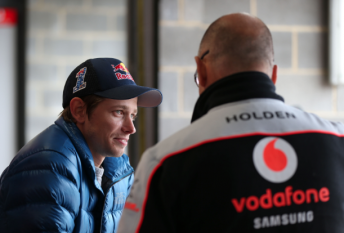 Australian motorcycling legend Mick Doohan is expecting Casey Stoner to have little trouble getting up to speed when he makes his anticipated move into V8 Supercars.

Having retired from grand prix racing at the end of the 2012 season, it is expected that the 27-year-old Stoner will appear in V8 Supercars’ second-tier Dunlop Series next year.

Stoner has built a strong association with the category’s powerhouse team, Triple Eight, over recent years – testing most recently with the squad’s Dunlop Series outfit earlier this month.

Doohan, who won five consecutive 500cc world motorcycle championships in the 1990s, says he hasn’t discussed the switch with Stoner, but will be watching with interest to see how he performs.

“He’s a talented guy, he’s young enough and I think a little bit of race craft will be the only thing that’ll take time,” Doohan told Speedcafe.com.

“Once he’s done a bit of testing I don’t think his speed will be a problem, just the race craft.

“He knows how to race so it’ll just be a matter of learning where you can and can’t put the car on the circuit when you’re in traffic.”

Doohan himself has sampled V8 Supercars in the past, completing short hit-outs with Paul Morris Motorsport in 2002 and the Holden Racing Team last year.

The 47-year-old says, however, that he never shared Stoner’s desire to forge a ‘second career’ on four wheels.

“Roland (Dane, Triple Eight co-owner) has invited me to come and have a run in his ride car too but I’ve got no intention to go car racing,” he said when asked if Stoner’s movements had made him regret not giving the local touring car scene a shake.

“Like I said when I retired from bikes, if I ever wanted to go back racing I’d go back and race bikes. That’s always been my passion.”

Doohan at the Race of Champions in Bangkok, Thailand, last weekend, bowing out in the quarter-finals of Sunday night’s individual competition after teaming with Jamie Whincup to make the semis for Australia in the previous evening’s Nations Cup.