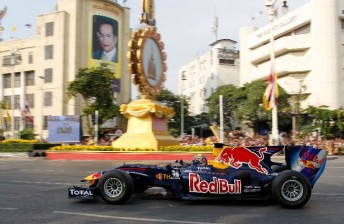 Triple Formula 1 World Champion Sebastian Vettel is not convinced that growing speculation of a Thai Grand Prix will become a reality in 2014.

Vettel competed at the Race of Champions event in Bangkok, Thailand, at the weekend – an event that country leaders hope is the first step towards earning a slot on the coveted Formula 1 calendar.

The Race of Champions was heavily supported by energy drink giant Red Bull, which remains majority owned by Thai concerns and is said to be a key player in the country’s Grand Prix bid.

Local dignitaries spoke enthusiastically of motorsport’s importance to Thailand at the weekend’s event, emphasising a desire to strengthen its tourism industry and show support for its growing automotive sector through racing.

It is expected, but yet to be confirmed, that the Race of Champions will once again be held in Bangkok next year.

Although local reports have suggested that the country already has an in-principal deal in place with Formula 1 management to host a race in 2014, Red Bull Racing’s own star Vettel refused to spur on the growing expectations within the country when asked of the potential for a Thai race.

“I think it would be great but I’m not sure how realistic it is,” he said.

“There are already a lot of races on the calendar and we are pretty busy throughout the year.

“I don’t know if there’s enough space to fit it (on the calendar) but we’ll see.”

If a Thai Grand Prix does go ahead, it will do so in a street race format, with local authorities said to be keen on replicating the night race in Sinagpore.

The country’s only FIA homologated race track, the 2.41km Bira Circuit, is expected to be demolished next year to make way for the increasing accommodation requirements of a nearby golf course.