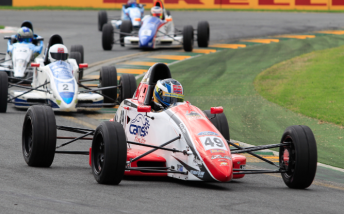 The 2013 Fujitsu Cool Driver Program – aimed at offering on and off-track support to the next generation of Australian racing talent – will start to accept nominations from tomorrow.

Next year’s Cool Driver program enters its third year, offering some financial support to a select group of youngsters in karting and Formula Ford – all with the aim of helping them carve their own name in the sport, similar to the program’s original entrants Scott McLaughlin.

Fujitsu General’s National Marketing Manager Marc Cheah is pleased to be involved in finding the next ‘big thing’ in Australian motorsport.

“Fujitsu is thrilled to once again be involved in the ‘Cool’ Driver program,” Cheah said.

“We are proud to help develop some of Australia’s most exciting racing talent, which has seen people such as Scott McLaughlin and Renee Gracie graduate to higher honours, living their dreams as professional race drivers.”

The program has been instigated by Chris Jewell – the V8 Supercars on-track race caller and part of this year’s Castrol EDGE Summer Grill.

CLICK HERE for more with Jewell in this week’s edition of Cafe Chat.