Brabham to compete with Andretti team next year

Brabham to compete with Andretti team next year 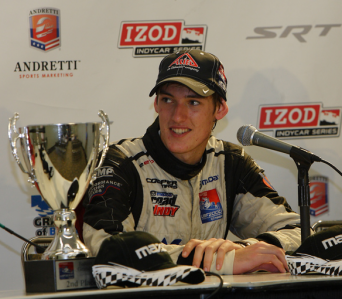 Matthew Brabham will continue his driving career in America, confirming that he will compete in the Pro Mazda Championship Presented by Cooper Tires.

The USF2000 champion will compete with Andretti Autosport – co-owned by Michael Andretti – driving the team’s #27 entry.

His position in the class comes with assistance from the Mazda Road to Indy Scholarship program, thanks to his success in USF2000.

Brabham recently tested with the team and is delighted to have secured his future in the United States as he aims towards a seat in the IndyCar Series.

“I am so excited to be driving for the Andretti Autosport team in the 2013 Pro Mazda Championship,” said Brabham.

“It was fantastic to drive for the team at the Indy test, and get a feel for how they operate. They are really professional and seem like a great bunch of guys to work with.

“The Pro Mazda had more power than the USF2000 car, so it was lots of fun to drive and gave me a good understanding of what to expect next season.”

“I think it is really cool to have the Andretti and Brabham names come together with Matthew joining the Andretti Autosport team,” said Geoff Brabham.

“Both Matthew’s grandfather Sir Jack and Mario are Formula One World Champions. Mario, Michael and I drove against each other for many years in Indy cars. Now Matthew has a chance to forge his own career. Having the history and heritage of both families behind him can only be positive, not only on the race track but also giving potential sponsors a very unique combination.”