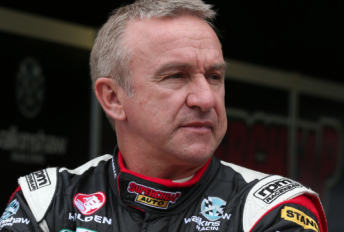 Russell Ingall has announced that he will end his full-time V8 Supercars career at the end of the 2013 season.

The 2005 V8 Supercars champion confirmed he has signed a one-year agreement with Walkinshaw Racing to conclude his 18th year in the sport.

After finishing 13th in this year’s V8 Supercars Championship, the 47-year-old will continue to drive the #66 Supercheap Auto Racing Commodore VF.

Barring injury or an unforeseen occurrence, the Gold Coast resident’s decision to remain in the sport for one final year will see him become the most capped driver in Australian Touring Car history when he makes his 226th event start (schedule for Townsville in July), surpassing current record-holder John Bowe. 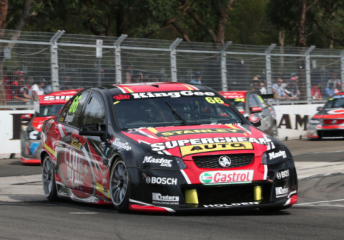 After winning the Australian Formula Ford Championship and attempting a European open wheel career, Ingall made his first start in a ‘V8 Supercar’ during the 1994 endurance races at Sandown and Bathurst, driving with Wayne Gardner Racing’s Coca Cola-backed team alongside Win Percy.

Ingall returned to the endurance races the following year, partnering Larry Perkins in his Castrol Perkins Racing team. It was the start of a eight-year relationship that saw the pair win two Bathurst 1000s (1995 and 1997).

Ingall finished runner-up in series points three times with the team before he made the switch to Ford’s Stone Brothers Racing in 2003.

After his fourth runner-up points finish in 2004, Ingall claimed the 2005 V8 Supercars Championship.

In 2008, he returned to Holden with Queensland-based Paul Morris Motorsports, and at the same time, began his partnership with automotive retail chain Supercheap Auto.

After four seasons at PMM, Ingall and Supercheap Auto switched to Melbourne-based Walkinshaw Racing this year.

In his 17 full-time V8 Supercars seasons, Ingall has earned 13 top 10 points finishes, while he has 15 top 10 finishes in the Bathurst 1000, including ninth place with Christian Klien this year.

The news of Ingall’s plan to stay in the sport for one final season leaves six drives not confirmed in the 28 car field.

The second Tekno Autosports seat remains unaccounted for, with the team still in negotiations with a number of potential pilots.

At Garry Rogers Motorsport, the team has not confirmed its second seat alongside new signing Scott McLaughlin. Frenchman Alexandre Premat remains a chance of retaining his seat.

SBR/Erebus Motorsport is yet to announce a replacement for Shane van Gisbergen, with Austrian Klien linked to the drive.

Lucas Dumbrell Motorsport has not announced either of its two drivers for the new year, although Scott Pye and Tim Blanchard have been heavily linked to the expanded squad.

Dick Johnson Racing’s second entry Dean Fiore has also not officially confirmed that he will remain as the driver of his #12 Falcon.