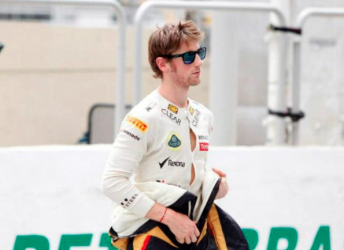 Romain Grosjean will been retained by Lotus for the 2013 Formula 1 season, the team has confirmed.

The 26-year-old’s season was tarnished by a number of incidents, including a spectacular crash at the start of the Belgian Grand Prix which earned him a one race ban.

Lotus’ confirmation means that the Enstone-based team will enter an unchanged driver line-up for the 2013 season, with Kimi Raikkonen remaining as the team’s lead driver.

“It’s fantastic for me to be continuing with Lotus for 2013,” he said in a statement.

“It’s superb to have the support of everyone at Enstone. I’m really looking forward to rewarding their faith when we take to the track in Australia.

“I learnt a lot in my first full season in Formula 1 and my aim is to put these lessons into practice with stronger and more consistent performance on track next year.

“There are a lot of exciting developments occurring behind the scenes at Enstone and I am very excited with the prospect of the E21.”

Team boss Eric Boullier says that continuity was a key reason behind the team’s decision to retain both its drivers for the 2013 season.

“Romain is a great talent and we are pleased that he is continuing with us for a second season,” Boullier said.

“With the continuity of two exceptional drivers like Romain and Kimi, we are well placed to build on our strong 2012 with even better results in the year ahead.”

The first round of the Formula 1 world championship will be held at Albert Park, Melbourne, on March 14-17.