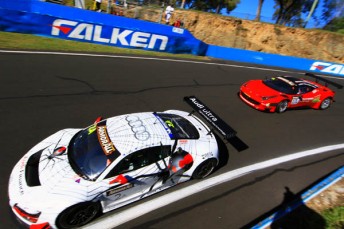 A record 20 cars will travel from overseas to compete against the best GT and Production cars Australia across the February 8-10 weekend.

The three teams that filled the top three places in the 2012 race, Phoenix Racing, Erebus Motorsport and Clearwater Racing, have all confirmed their return for next year against, making up some of the 32 GT-specification entries.

The French entry is one of most interest. The factory-run Peugeot RCZ France team will field two cars, with former 500cc world champion Mick Doohan slated as a potential starter.

Event director James O’Brien says that he is pleased with the initial entry list.

“As it always does, the entry list will likely change in its makeup in coming weeks as teams finalise their plans, but to have a 50-plus car field locked in vindicates the change to a GT3 format alongside production cars,” said O’Brien.

“We are particularly pleased at the level of international interest with 20 cars coming from overseas.

“The Liqui-Moly Bathurst 12 Hour is fast becoming a ‘must win’ race on the international GT3 calendar and the 2013 edition should provide an entertaining spectacle and enhance the event’s reputation further.”

According to event organisers, a breakdown of GT vehicles doing double duty and competing in the opening round of the Australian GT Championship – to include the first 50-minutes of the Liqui-Moly Bathurst 12 Hour – will be available soon.

See below for the complete entry list for the Liqui-Moly Bathurst 12 Hour.