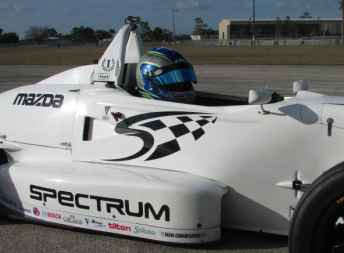 Mathew Hart in the USA-specification USF2000 at Sebring

The youngster completed a full day of testing in a USF2000 car at Sebring Raceway as part of his ‘Spectrum Driver to USA prize’ that he won in this year’s Australian Formula Ford Championship.

After running just over 320 kilometres of testing, Hart took a tour of the team’s factory and attending the IndyCar test at Sebring the day before.

“The downforce and slicks were something I’d never had a feel for before, so lap by lap my mid corner speed improved as I felt more confident with the car’s grip and what it could handle.”

“Mathew did an exceptional job. He adapted to the car quite quickly and was bang on the pace,” Cape said.

“Not only was he quick, but also super consistent, which really impressed us. The methodical way he went about everything showed the quality of the driver coaching he’s had at Synergy Motorsport.

“We’d love to see him do some more racing here in the States and feel sure he has a strong career ahead of him as a driver.”