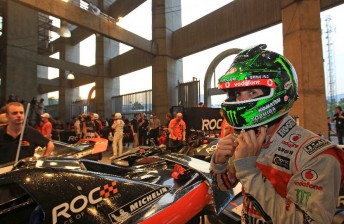 Jamie Whincup prepares to hop into a ROC buggy

Jamie Whincup says that his experience at the Race of Champions at the weekend has whet his appetite for more racing outside of V8 Supercars in the coming years.

Although keen to emphasise his ongoing commitment to V8 Supercars, where he has a contract to compete with Triple Eight for another two seasons, Whincup says his ROC experience made him hungry to master other disciplines.

“I used to look at the overseas categories and from Australia everything seems so far away, it seems like another world,” he told Speedcafe.com in Bangkok.

“But just hanging with the guys this weekend, they’re just normal dudes having a good time. Their personalities are huge, you don’t see that on the telly. I’ve certainly gained some good friends out of the weekend.

“Don’t get me wrong, I’m still massively committed to V8 Supercars in Australia, it’s an awesome category and will be for a long time to come, but certainly I’d love to do more one-off events.

“I’m hungrier now. I’m disappointed that I didn’t make it through to the final, so I’m going to go away and do some laps… even to drive around in a left-hand drive car and make sure I’m absolutely prepared in case I get an invitation to come back to this event or do something similar in the future.

“This was a good warm-up for me. I set my expectations low and everyone said “he’s only having us on”, but you’ve got to be realistic. To beat the world’s best at something they’ve got more experience with is impossible, and I think we proved that this weekend.” 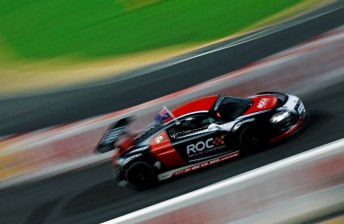 Of the vehicles he sampled at the Race of Champions, Whincup’s enthusiasm for the Audi R8 LMS GT3 was most evident.

Whincup’s V8 Supercars team-mate Craig Lowndes has made occasional appearances in Audis both in Australia and overseas in recent years.

While Whincup describes undertaking a similar part-time GT program as “definitely more realistic” than an oft-touted switch to NASCAR, the 29-year-old says finding the time to do anything outside of V8 Supercars justice will still be a major challenge.

“If I were to do the 12 Hour, don’t underestimate the challenge of it,” he said.

“Lowndesey doesn’t just spend one day of the year thinking about the Bathurst 12 Hour, there’s testing and a lot of other work that goes on behind the scenes.

“When V8 Supercars is so crazy you don’t really have the time to invest in other things.

“But certainly if I can set myself up, get a good group of people around me to organise the rest of my life and I can find the time, I’d certainly love to do more racing of some sort.”

Whincup added that the Race of Champions has also opened his eyes to how V8 Supercars could make race weekends more pleasant for the drivers.

“Maybe I shouldn’t say it, but back in Australia we don’t know how to look after the drivers at all,” he said.

“You don’t realise it, it’s pretty ruthless when you’re back there (in Australia), but the way we got treated this weekend… I’m not saying we need a police escort to the track every day, that’d be over the top, but there are a lot of little things we can do to accommodate the drivers would go a long way with all of us.

“Certainly if V8 Supercars is interested at all I’ll be only too happy to share my experiences this weekend and discuss how we can better look after the drivers.”

Whincup was joined at the Race of Champions by a large portion of his Triple Eight crew as a reward for their efforts during another dominant year for the team.

See below for Jamie Whincup’s three video diaries with Speedcafe.com from across the weekend