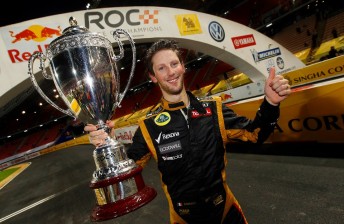 Romain Grosjean with the Race of Champions trophy

Frenchman Romain Grosjean has taken victory in the 25th running of the Race of Champions in Bangkok, Thailand.

The Lotus Formula 1 driver beat Danish sportscar legend Tom Kristensen two-nil in the final, steering the ROC buggy and KTM X-Bow in the respective races to secure the weekend’s most coveted prize.

Grosjean had earlier ended the unbeaten runs of German stars Michael Schumacher and Sebastian Vettel in the semi and quarter finals respectively.

Grosjean proved the master of the KTM X-Bows on both occasions, with Vettel failing to even complete his run after tagging the wall at the exit of the final corner during the first half-lap, causing smoke to emanate from the right-rear of his vehicle.

The other semi-final had seen Kristiensen take a relatively comfortable victory over Coulthard, with the Dane having enjoyed the good fortune of racing the Audi R8 he knows so well in both the quarter and semi-finals.

Reigning winner Sebastien Ogier had been Kristensen’s victim in the quarters – the World Rally Championship star not helping his own cause by bumping the wall on the inside of the final corner during his first lap.

Mick Doohan held up the Australian flag in the group stage, enjoying a little good fortune in the shape of a penalty for Thai rival Tin Sritrai during a decisive final heat.

The five-time world motorcycle champion was comprehensively eliminated in the quarter finals by Michael Schumacher, who was again dominant in the NASCAR-style Euro Racecars.

CLICK HERE for more on how the two Australians fared

For Grosjean, the ‘Champion of Champions’ title was a sweet end to a tumultuous year that saw him make a promising yet accident-stricken return to Formula 1.

“It’s been a tough end to the F1 season but I finally got back on the podium yesterday, and now this,” he smiled.

“It’s just great to get this win before I head off for a holiday.”

Lotus is yet to confirm whether Grosjean will be retained for next season, with the 26-year-old saying he is “hopeful” of returning to the Enstone-based squad.