Australians go down fighting in Race of Champions

Australians go down fighting in Race of Champions 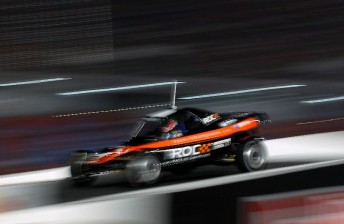 Jamie Whincup and Mick Doohan had to be content with taking heat victories before bowing out of the Race of Champions event in Bangkok, Thailand.

Whincup failed to progress through the group stage after taking just one win from three starts, while Doohan fared marginally better in taking two wins before being knocked out in the quarter-finals.

Doohan began his evening by defeating fellow motorcycle world champion Jorge Lorenzo in the ROC buggies before being soundly beaten in the KTM X-Bows by Sebastian Vettel.

The 47-year-old’s night appeared to be done when he was edged out by Narain Karthikeyan in his third heat, but a subsequent five-second penalty to the Indian for clipping the chicane at the crest of the cross-over saw Doohan into the quarter finals.

His final eight defeat would come in comprehensive fashion at the hands of Michael Schumacher, who once again showed his affinity with the NASCAR-style Euro Racecars.

Earlier Whincup had almost pulled off a major upset in his first heat – surviving a major understeer moment mid-way through his run in the Audi R8 before narrowly lose out to 13-time Formula 1 Grand Prix winner David Coulthard.

A big win over recently crowned Production Car World Rally Champion Benito Guerra in the Toyota GT86s followed before the combination of reigning ROC winner Sebastien Ogier and the notoriously tricky KTM X-Bows spelt the end of the road for the Australian hero.

Speaking directly after his final run, Whincup expressed a strong desire to put in an improved showing at the 2013 event.

“To beat these guys you’ve got to be absolutely on your A-game and do your homework before you get here,” he said.

“It’s been a really great event and I’d love to come back next year, but I think I might need to buy a buggy to have a bit of practice in before then!

“I hoped to win a race out here tonight and I managed to achieve that so I’m not too disappointed.”