Room for improvement from Australians after ROC Nations Cup

Room for improvement from Australians after ROC Nations Cup 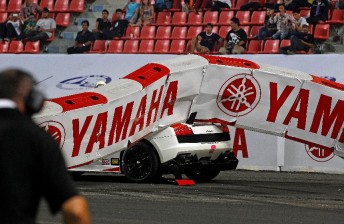 Jamie Whincup and Mick Doohan put in an admirable performance in the Nations Cup competition at the Race of Champions, but were ultimately humbled by German superstars Michael Schumacher and Sebastian Vettel.

Australia faced Germany, India and Thailand in the group stage of the eight-team competition, progressing through to the semi-final thanks to three victories from their six group heats.

The Formula 1 World Champions subsequently made short work of the Australians in the best-of-three semi finals, with Whincup and Doohan going down to Schumacher and Vettel respectively.

“We made it through the first round but then came up against the Germans and obviously got knocked out.

“If there’s any doubt back in Australia that those F1 boys aren’t what they make out to be then you can eliminate that.

“Although Mick and I didn’t do the best job we could, those blokes are just seriously fast.” 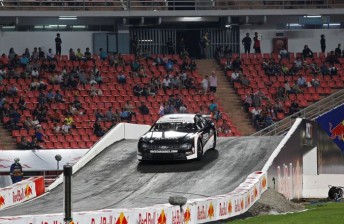 Whincup’s evening began in inauspicious circumstances, with the Gold Coast-based driver spinning a KTM X-Bow on his warm-up lap directly in front of a large portion of his Triple Eight crew, who are in Thailand as a reward for another dominant season in the V8 Supercars Championship.

Whincup was eventually awarded the win in his first heat against Narain Karthikeyan after the Indian received a five-second time penalty for clipping the chicane at the cross-over.

Doohan then also defeated his Indian counterpart Karun Chandhok in the ROC buggies, before Whincup made it three from three with victory over local hero Nattavude Charoensukawattana, also in the buggies.

Success proved elusive from there, however, with Doohan losing out to Thai youngster Tin Sritrai in the X-Bows and Whincup struggling in the NASCAR-style Euroracecar against Schumacher.

Doohan then ended the group stage in spectacular fashion by stuffing a Lamborghini Gallardo Super Trofeo under the Turn 1 barriers after an electronic glitch wreaked havoc with the car’s anti-lock braking system.

Both semi-finals were heavily one-sided affairs as Whincup put in a messy second run against Schumacher in the Euroracecar and Doohan failed to match the blistering pace of Vettel in the ROC buggy.

“They were all telling me that I should go good in the stock car but it’s nothing like a V8 Supercar whatsoever,” explained Whincup.

“I thought if anything I was going to have a good chance of beating Schumacher or getting close to him in that but the problem was they put the seat in the wrong side of the car (left-hand drive)!

“I was smacking barriers on the right and too far from the apex on the left.”

Whincup noted that the newly installed chicane on the cross-over bridge had proved particularly tricky to negotiate in the Euroracecar.

The bulk of the field had each enjoyed just two laps of practice with the chicane installed after late-comers Schumacher, Vettel, Romain Grosjean and David Coulthard called for the changes immediately after driving their first laps of the circuit during the late afternoon.

All 16 competitors will enjoy a final 40 minute warm-up session on Sunday evening prior to the night’s individual Race of Champions competition.