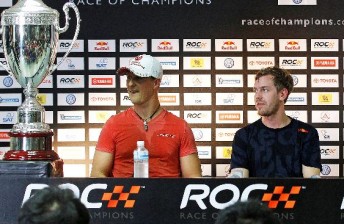 Schumacher and Vettel enjoyed yet another team win at the ROC

Dynamic duo Michael Schumacher and Sebastian Vettel have handed Germany its sixth consecutive Nations Cup title at the 25th running of the Race of Champions in Bangkok, Thailand.

The pair, which boast 10 Formula 1 World Championships between them, dominated the evening’s proceedings by winning all 10 of their races throughout the night’s group stage, semi-final and final.

Schumacher and Vettel defeated the French partnership of Romain Grosjean and reigning individual ROC winner Sebastien Ogier two-nil in the final to take the title.

The Germans had earlier knocked Australians Jamie Whincup and Mick Doohan out of the competition in similarly emphatic fashion during the semis.

The Australians had progressed to the semis by placing second to Germany in Group B, which also included ROC Asia winners India and local team Thailand.

The other side of the draw had seen the Frenchman defeat the Team All-Star duo of Tom Kristensen and Jorge Lorenzo in the semis, with Great Britain and Team Americas out after the group heats.

The night though was all about the two German stars, who had earlier stamped their authority on the event by leading a successful campaign to change the course layout almost immediately after arriving at the venue.

CLICK HERE for Speedcafe.com’s earlier story on the late change to the track layout

“It was already very special to win five times in a row but this new record just feels great,” said Schumacher after a spectacular victory celebration that saw the 42-year-old hitch a lift with Vettel on the side of one of the single-seater ROC buggies.

“The Race Of Champions is a nice event with a nice set-up, there are great guys here and tough competition.

“We were pretty scared of the guys on Team France but in the end they lost time in the final heats so we were lucky to be consistent the whole way through.”

Vettel, who has never made it to the individual final in his five previous ROC attempts, was quick to turn his attention towards tomorrow night’s showpiece event.

“Even Michael hasn’t managed six titles in a row before so this is something special,” he said.

“Now I can look forward to tomorrow and hopefully stay in the competition as long as possible. I’ve tried that for the last five years and haven’t succeeded yet so it would be nice to put my name on that trophy too.”