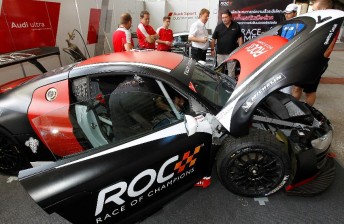 While the focus at the Race of Champions is well and truly on the event’s star driver line-up, an army of dedicated crews can be found beavering away within the walls of the Rajamangala Stadium in Bangkok, Thailand.

Four examples of each of the seven different vehicles used are present for the two-at-a-time match racing competition, ensuring a significant amount of preparation and organisation is required to keep everything running smoothly.

The biggest presence in the stadium’s makeshift paddock is, not surprisingly, held by tyre supplier Michelin, which has supported the Race of Champions since the first running of the event 25 years ago.

The company has a team of 10 technicians and fitters on hand to run its ROC effort, which sees up to 500 tyres used throughout the four days of track action. 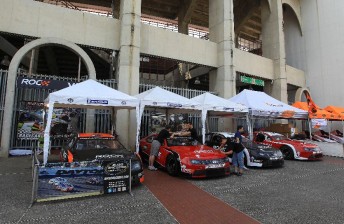 All cars use grooved tyres, which according to the director of Michelin’s competition department, Pascal Couasnon, is for the dual purpose of protecting the track’s temporary surface while also providing “a bit of slip and slide for the show”.

Rapid warm-up is a key priority for the ROC rubber compounds due to the quick-fire nature of the competition, while starting pressures are left in the hands of the tyre technicians, rather than the drivers.

With no set changing intervals in place, tyre wear is monitored closely between the cars to ensure that each head-to-head battle takes place on a level playing field.

Although Michelin is widely known for its desire to compete in open competition classes against other tyre manufacturers, Couasnon explains that the ROC is a special event for the company.

“The spirit really is to celebrate the end of the season. It’s competition but it’s about having a good time as well,” he told Speedcafe.com in Bangkok.

“We are also happy to be in Thailand this year as we have four facilities and more than 600 employees here.

“When the best drivers come here from around the world, it is good that they come with Michelin.”

The individual component to the Race of Champions contest will take place tonight after Germany took out Saturday’s Nations Cup contest for the sixth consecutive year with its Formula 1 World Champions Michael Schumacher and Sebastian Vettel.