World champions tip Whincup to surprise in Race of Champions

World champions tip Whincup to surprise in Race of Champions 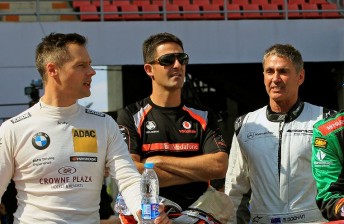 From left: Priaulx, Whincup and Doohan at the Rajamangala Stadium

Multiple world champions Mick Doohan and Andy Priaulx are expecting Jamie Whincup to be a surprise packet when the Race of Champions switches into competitive mode tonight.

The majority of the ROC field tested out the Rajamangala Stadium layout in Bangkok, Thailand, during a three hour practice session yesterday ahead of Saturday night’s Nations Cup contest.

Doohan has warned the other competitors – which includes likes of Sebastian Vettel, Michael Schumacher and Tom Kristensen – not to be fooled by Whincup’s continual downplaying of his chances for Sunday’s individual contest.

“Jamie is picking it up really quickly,” Doohan, who is making his third ROC appearance this year, told Speedcafe.com following practice.

“He was generally pretty tentative in his first few practice laps, like everyone is, but he knows how to throw a car around.

“I suspect he’s going to surprise, especially in the individual race on Sunday. If he’s not in the top four then he’s had a bad run I’d say.” 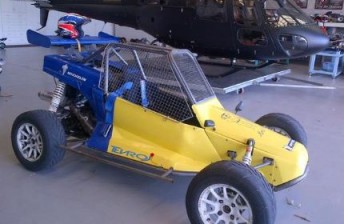 Doohan and Whincup were able to undertake a small amount of pre-event practice at the motorcycling legend’s Gold Coast property before heading to Thailand.

Doohan’s facility includes a karting circuit, while he also has a buggy, pictured, that’s similar in specification to those used in the ROC.

“Mine is a bit smaller with a little bit less power, but any miles that I could do pre-event were good because I don’t race anything full-time,” he said.

Former three-time World Touring Car Champion Andy Priaulx, meanwhile, is the only driver in the 16 strong ROC field to have raced against Whincup before – the pair meeting during the Briton’s occasional V8 Supercars endurance race appearances.

Priaulx was part of the Triple Eight V8 Supercars line-up at the 2010 and 2011 Armor All Gold Coast 600s, and says the four-time V8 Supercars Champion is world class.

“The V8s are a hard car to drive and the level is really high there, especially at the front of the field.

“He’s on a roll, he’s won multiple championships so I think we can expect a lot out of him this weekend.”

The ever-cheeky Priaulx, a now seven-time veteran of ROC competition, also had some advice for all of the event’s rookies.

“I’d recommend plenty of partying, drink lots of alcohol and eat all of the wrong food,” he smiled.

“Basically don’t take any interest in the event, just rock up and drive.”

This year marks the 25th running of the Race of Champions and the first time it has been held in Thailand.