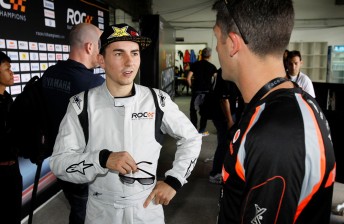 Lorenzo chats to Whincup at the Rajamangala Stadium

Casey Stoner may not be the only recent MotoGP world champion with a four-wheel future as Jorge Lorenzo aims to learn from the best at the Race of Champions in Bangkok, Thailand, this weekend.

Lorenzo is making his first appearance at the stadium event this weekend, joining retired Australian legend Mick Doohan as the only motorcycle representatives in the 16 strong field.

The 25-year-old Spaniard currently sits atop the motorcycle racing world having won two of the last three MotoGP championships following a stellar junior career that included winning the 2006 and 2007 250cc titles.

Lorenzo is not a complete four-wheel novice, however, with his limited experience having included a run at Rally Monza two weeks ago, where he competed in a Citroen DS3 WRC against a field that included fellow bike stars Valentino Rossi and Andrea Dovizioso.

“I feel kind of intimidated because I come from two-wheels,” said Lorenzo ahead of tonight’s Nations Cup contest, where he will partner sportscar legend Tom Kirstensen in ‘Team All Stars’. 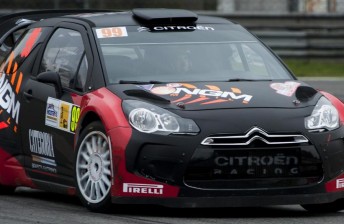 “It would be fair to compete against (Dani) Pedrosa or (Casey) Stoner on four-wheels because they (the other guys at ROC) have so much experience!

“I like to ask them questions to improve my driving skill. It’s going to be a good challenge.

“I am going to four-wheels sometimes like the Rally of Monza two weeks ago, so this is an introduction to the four-wheel world.”

He added of competing against Rossi on both two and four wheels: “I have been slower every time in the four-wheel world! He was really, really quick in the Rally of Monza.

“Now he is coming back to Yamaha we’ll form a very strong team next year.”

One man taking a particular interest in Lorenzo’s progress this weekend is Australia’s Jamie Whincup, who has been working closely with Stoner as the recently retired 2007 and 2011 MotoGP champion evaluates a potential switch to V8 Supercars.

“I spent time this week with Casey Stoner in my car and he went very, very well,” said Whincup.

“I’ve seen Mick (Doohan) in a sprintcar as well and that was pretty loose!