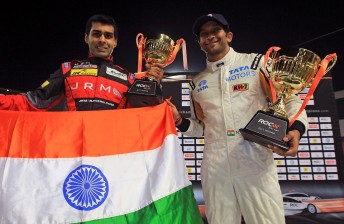 Chandhok (left) and Karthikeyan on the ROC Asia podium

Former Formula 1 pilots Narain Karthikeyan and Karun Chandhok have won India a place in the 2012 Race of Champions by taking out the inaugural ROC Asia contest in Bangkok, Thailand.

Two-man teams from India, China, Japan and Thailand competed in the ROC Asia event, with the locals already guaranteed a spot in Saturday night’s Nations Cup.

Karthikeyan and Chandhok took four of their six preliminary heat wins between them before beating Japanese pair Kazuya Ohshima and Takuto Iguchi by winning the first two legs of the best of three final.

The local drivers had in turn earned their place in the ROC Asia by placing in the top two of the four-man ROC Thailand event held before it.

The Thai drivers received vocal support from the modest crowd in attendance on a hot and humid night at Rajamangala Stadium.

Only the VW Sciroccos, ROC buggies and Toyota GT86s were used for tonight’s competition, with the event’s other four cars – the Audi R8 LMSs, Lamborghini Gallardo Super Tropheos, NASCAR-style Euroracecars and KTM X-Bows – not set to make a competitive appearance until Saturday night’s Nations Cup contest.

The circuit itself received a minor facelift prior to the ROC Thailand competition with a chicane installed on the incline of the cross-over bridge.

CLICK HERE for more on the Friday practice session

See below for the full Nations Cup field