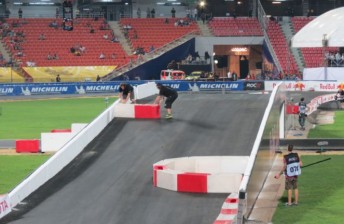 Changes have been made to the layout of the Race of Champions course in Bangkok, Thailand, just hours prior to the start of tonight’s Nations Cup contest.

A two-part chicane was added to the incline of the Rajamangala Stadium venue’s cross-over bridge prior to the ROC Thailand and ROC Asia events on Friday night following afternoon practice that saw cars repeatedly become airborne over the crest.

Star drivers Michael Schumacher, Sebastian Vettel, Romain Grosjean and David Coulthard, all of whom arrived at the circuit for the first time this afternoon, ran just one lap of the circuit each before instigating a closer inspection of the chicane.

After over an hour of trial and error, a three-part chicane, placed closer to the crest of the cross-over than the one used last night, was decided upon for tonight’s competition. “We saw the situation, we quickly looked at it and found a solution,” said Schumacher when asked by Speedcafe.com about the issue.

“I think it’s a good solution to actually make it more spectacular.

“We will keep on jumping anyway, we just have a chicane with some extra corners.”

The delay saw the scheduled 80 minute practice for the four drivers reduced to just half an hour.

Many of the remaining 12 drivers, including Australia’s Jamie Whincup, watched on as the revised layout was tested before jumping on-track for their last warm-up prior to the start of the Nations Cup at 2000 local time.