Whincup makes his mark during Race of Champions practice

Whincup makes his mark during Race of Champions practice 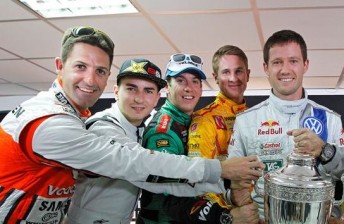 Jamie Whincup has described practice day at his maiden Race of Champions appearance as a ‘complete trip out’ after a brief series of outings that included a meeting with one of the circuit’s concrete walls.

The majority of the drivers had their first taste of the Rajamangala Stadium layout in Bangkok, Thailand, during a three hour session this afternoon.

“At the moment I’m bog slow to be honest,” a modest Whincup told Speedcafe.com.

“The boys that have been here (the Race of Champions) before are very, very quick.

“It’s a complete trip out. I’ve never ever driven a front-wheel-drive, a four-wheel-drive or even a left-hand drive car before. “You get three laps in each car and half work it out by the third lap. But then you’ve got to jump in another car and have to go again.

“I’m probably more confused now than at the start of the day!”

While no end-of-day times are produced from the practice session, Whincup was third fastest of the seven drivers recorded in the R8 LMS.

Whincup’s run in the new-to-ROC Toyota GT86 was cut short however when he understeered into the concrete wall at the end of the back straight, causing cosmetic damage to the Japanese sportscar.

“It was first time out with the Toyota on cold tyres,” he said of the moment.

“There are hard walls and soft walls and unfortunately I hit one of the hard ones, but they (ROC organisers) were pretty cool about it. They fixed it up, it wasn’t too bad.”

Priaulx made a mess of the plastic barriers at the final corner after the electronics system in the Lamborghini Gallardo he was driving became confused during an airborne moment at the circuit’s cross-over bridge – resulting in a partially stuck throttle.

Those missing in action today included Sebastian Vettel, Michael Schumacher and David Coulthard – all of which will not arrive at the circuit until tomorrow.

Whincup will combine with five-time world motorcycle champion Mick Doohan for tomorrow night’s Nations Cup competition before fighting for the Race of Champions crown itself on Sunday.