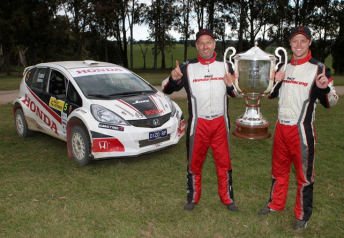 The East Coast Bullbars Australian Rally Championship has secured its largest-ever television package for 2013, among a raft of potential changes to the new season.

Network Ten has re-committed to the ARC for 2013, offering a total of 48 hours of coverage to air the six round series on its primary channel and digital channel One.

Twelve one hour shows will be produced, with each shown on Ten in a revised Sunday afternoon time slot and replayed on One a minimum of three times.

The new TV deal is also likely to see a raft of regulation changes for the 2013 season. A meeting last week between the ARC’s organisers and stakeholders saw a list of initiatives floated and are currently subject to approval from the Australian Rally Commission.

The changes are headlined by a televised ‘Power Stage’ on the Friday of each event. The Power Stage was trailed with success at this year’s Scouts Rally SA and will be run to a similar format to that of the World Rally Championship.

“One of the key messages that was discussed at our 2013 East Coast Bullbars Australian Rally Championship Organisers and Stakeholders meeting last week was that we need to continually evolve the product and just because we have done something for so long doesn’t actually make it right in this day and age,” Pedder said.

“Certainly balancing the needs of all our stakeholders and in particular the commercial versus sporting and participation issues that we face is a continued source of concentration.”

The ARC is also set to revamp the class and category awards for 2013, including the introduction of a 1600cc Cup for two- wheel drive vehicles to replace the existing Privateers Cup.

An ARC Hall of Fame will also be implemented, with the first inductees to be awarded as part of a special gala event on Tuesday 26th February in Canberra

Details of the Power Stage and other regulations will be released with the pending 2013 East Coast Bullbars Australian Rally Championship Sporting and Technical Regulations, currently in the final stages of completion.