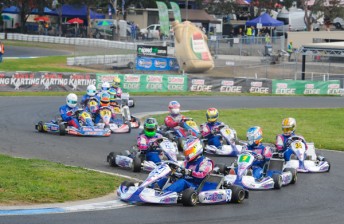 MG Tyres will be the control tyre in the Castrol EDGE CIK Stars of Karting Series for the next three years (Pic: AF Images/Budd)

Competitors in the Castrol EDGE CIK Stars of Karting Series will compete on MG Tyres for the upcoming three years.

It is the first time since the series began in 1993 that drivers in Australia’s elite series will compete on the Brazilian-manufactured product that is imported into Australia by Remo Racing.

Both the Pro Gearbox and Pro Light category will line up on MG’s Medium ‘Yellow’ compound tyre, while Pro Junior will fit the MG harder compound tyre for their campaign.

“Here at Remo Racing we have been a long-time supporter of the CIK Stars of Karting Series, this support will now go to another level with the opportunity to become the tyre supplier for the series,” said Remo Luciani, who is also the importer for the Kosmic chassis and IAME engines.

“I really believe in the CIK style of racing and the series and I’m excited about the opportunities that lie ahead.

“The MG Yellow tyre is a tried and tested compound in Australian conditions, and we have significant levels of stock ready for distribution now. The HZ (Red/White) compound is the MG’s CIK hard tyre and new to Australia, we will have stock of this product in Australia by January 15.”

“This decision is one of biggest decisions that we, as a series, have had to make in the 20-year history of the championship and arguably one of the toughest also,” said International Karting Committee Chairman Craig Denton.

“Dunlop Kartsport has been a fantastic supporter of the series over many years, particularly since it was rejuvenated four years ago. On behalf of the committee as series organisers, the karting industry, series teams and drivers, I would like to publicly thank Les, Ann and Luke May for their commitment towards getting the series to where it is today.

“The tender process was an intense one with significant testing going into it, and the committee also put a high priority on the presentation of, and the technical support from, the tyre supplier. Following many hours of deliberation, it was decided that the successful tenderer was Remo Racing with the MG Tyres product.”

The 2013 Castrol EDGE CIK Stars of Karting Series kicks off in Ipswich, Queensland on Ferbruary 23/24.