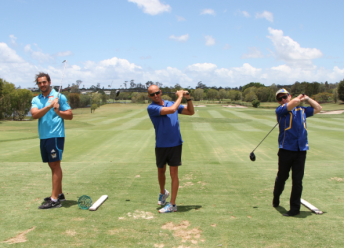 V8 Supercars drivers Lee Holdsworth and Tim Slade will embark on a competition of a different kind when they face off against other Gold Coast-based professional sportspeople in a charity golf day, known as ‘Clash of the Codes’ next week.

It will be the first time that a V8 Supercars driver will be part of the day, to be held at the Glades Golf Course next Wednesday, raising money for the HELP Foundation.

Holdsworth and Slade will lead teams that play in the four ball ambrose tournament and score points towards their individual sport in what’s being pitched as the battle between turf, surf and bitumen. 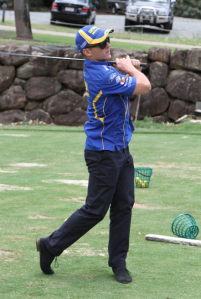 Holdsworth got into the swing today

In a press activity today, Holdsworth, Titans hardman Ryan James and ironman Phil Clayton got together for some practice before next week’s charity tournament.

“It’s good that V8 Supercars can come up against these other sporting teams here on the Gold Coast and raise some money for local charities,” said IRWIN Racing’s Holdsworth.

“The Suns and Titans are in their pre-season, while we’ve hit the off season, so I imagine there will be a few different approaches! Although I’ve finished racing for the year, I’m already back into preparation for next year and having a day to play golf on the Gold Coast and raise money for charity, well there could be worse ways to be training!”

Holdsworth says that preparations are well on track for Stone Brothers’ switch to the AMG Customer Sports brand under the Erebus Motorsport umbrella in 2013.

“The boys aren’t getting much of a break over Christmas, it’s all hands on deck and they are working around the clock to get the Erebus Motorsport machines together,” he said.

“They’ve got four cars to build by mid-January, but they are on track and doing a fantastic job.

“Erebus is bringing some great things to our team, the relationship with the AMG guys in Germany is very strong and while there’s a mountain of work still to be done, it’s all looking very good at this stage.”

The first public display of the three Erebus/AMG E-Class V8s will be at the V8 Supercars test day at Sydney Motorsport Park on February 16.