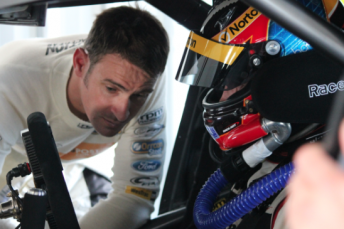 Alex Davison inside on of FPR’s new Car of the Future Falcons, receiving guidance from younger brother Will

Alex Davison has scored the plum ride in the new fourth Ford Performance Racing entry for the 2013 V8 Supercars Championship.

It is Davison’s third different drive in the V8 Championship, having started his career with Rod Nash Racing in 2005. A poor season saw him enjoy success in international Porsche racing, before coming back to Australia for a drive with Stone Brothers Racing in the IRWIN Falcon.

While his final year at SBR was his pick of his seasons (finishing 11th overall), it was a largely frustrating experience.

In 2012, Davison secured a Carrera Cup drive and finished third outright – enough to grab the attention of Charlie Schwerkolt, who announced in May that he was taking his Racing Entitlements Contract to FPR to start the team’s fourth car. 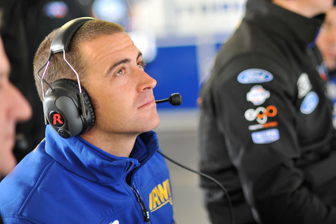 Davison with the IRWIN Racing team in 2011

Schwerkolt has selected Davison for his maiden season with FPR, and it’s a chance that Davison is relishing.

Speedcafe.com’s Grant Rowley spoke to Davison about his new opportunity, expectations, testing FPR’s Car of the Future Falcons and racing with his younger brother Will.

SPEEDCAFE: You were first linked to Charlie’s seat mid-year. You must be relieved to know that this is exactly what you’re doing next year?

ALEX DAVISON: Yeah, absolutely. It has been a long year out of the category full-time. Clearly, it has been a focus to get back onto the game for next year. I’m very excited to have it locked away and it was great to get a taste for it at Winton earlier in the week.

But really, I’m looking forward to getting into work and getting stuck into it properly next year.

SPEEDCAFE: When someone slots into the category, one of the first questions is usually about ‘expectations.’ This is your third attempt, but arguably, your best …

DAVISON: Clearly, the goal is to win races, and if I didn’t genuinely believe in myself that I was capable of that, I probably wouldn’t be doing this.

Winning is the goal. Plain and simple. How quickly can I get to that point? Who knows. I’m not going to say to you “I’m going to do this, achieve this, finish here.” I’ve barely sat in a car. We have two or three test days before Clipsal. In that time, I’ll be able to establish where I’m good, where I’m not, where I need to improve and set some realistic goals for the year.

In 2011, for the most part, I was consistently in the top 10. We had a lot of top five results, two podiums and many top 10 qualifying results. We were getting to the point where we could have been aiming for a win sooner rather than later.

SPEEDCAFE: While we’ve mentioning you as a potential driver with Charlie, was there a time during the year that you thought “I’m going to miss out again”?

DAVISON: Yeah, bloody oath. It went on for a long time. Charlie and I know each other from a long time ago. As you could imagine, I’ve been at him from the beginning. He would agree with that, but I had no idea what he was going to do. Clearly, I’m relieved that it has come off, and extremely thankful for the opportunity.

SPEEDCAFE: Given where this team FPR has been punching in 2012, and how advance the team is with its Car of the Future program, that must give you confidence …

DAVISON: Absolutely. It was my number one pick, out of any seats which were available. Clearly, it was the seat everyone wanted, based on Mark (Winterbottom), Will and Dave’s performances, and the fact that they have three Car of the Future Falcons on track already. You have to feel confident with all of that.

SPEEDCAFE: It’s the first time that you get to work side-by-side with your brother on a full-time basis, but you guys were team-mates at DJR for one or two endurance seasons …

SPEEDCAFE: That was for a couple of races – your drive with Charlie puts you guys in each other’s pockets for 16 events …

DAVISON: It will be good. It’s interesting. From my side, it’s nothing but positive. There’s no negatives to it.

We raced against each other for three years and there were no problems at all. There were times when we came up on each other on the track, and we raced hard, no different to how we raced anyone else. Both of us are fair racers. We didn’t need to treat each other different, and the same will happen now. From a career perspective, we support each other a lot, and I’ll be using Will as much as I can to learn as quickly as possible.

SPEEDCAFE: You had a steer of the new FPR COTFs at Winton. How did you find them?

DAVISON: It was a bit if a taste for me. I only did two three or four lap runs in total. It’s hard to judge the car too much from that, but from what I could tell, it is a very different feeling car.

The test was enough to get a taste and feel for the car, but not a whole lot more.

So far, I have to say I like the feel, and I think it will suit me well. The track conditions at Winton were very poor. It was hot and slippery. Even the best handling car in the world would have been sliding around. It wasn’t the prefect conditions to evaluate the car. It was really good, though, and I’m really looking forward to getting in my own car.

SPEEDCAFE: You might only get an opportunity to test a couple more times before Clipsal, including the all-in test at Sydney Motorsport Park (February 16). Does a potential lack of miles concern you?

DAVISON: No, not at all. I believe there’s two or three days, including the Eastern Creek test, where we’ll get the opportunity to drive the cars again. I’m not 100 percent across the schedule, but there will be time.

I think I’ll be OK. The more running the better, but it’s not like I’m starting from scratch. What does give me confidence is that anytime I hoped in a V8 Supercar this year (ED: Alex drove with James Moffat in the endurance races), I felt at home straight away. I actually felt more at home in a V8 than in a Porsche. That’s a positive.

Everyone, to an extent, is starting from scratch with the new cars. I’ll just get in, see how we’re going, and like any new car or team, I’ll work on it, find my weaknesses and build on them.