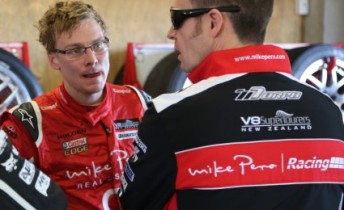 Second generation V8 Supercar and V8 Super Tourer driver, Jack Perkins will make up part of the commentary team for World Series Sprintcars during this summer.

Jack – who joined John Bowe for Speedcafe.com’s Crimsafe Endurance Countdown – has carved himself a side career as an accomplished commentator and observer of the sport and it will be his racing insight that will be used as he joins the commentary team for World Series Sprintcars’ TV programming, due to air on SPEED TV Australia.

“In the last few years, as my driving commitments in V8 Supercars have tapered to part-time co-driving, I’ve commentated a few different forms of racing and I’m looking forward to commentating the WSS alongside Wade. I hope I can bring a young, fresh voice to the sport and keep the audience entertained.

Perkins – whose father, Larry, had the opportunity to test a Sprintcar back in the days when he and 10-times Australian Champion, Garry Rush were both under the Castrol banner – explained he’s been a long time fan.

“I’ve been a long time supporter of WSS and Sprintcar racing,” said Perkins. “It’s good, hard, proper racing, and something my mates and I can watch and enjoy during the off-season for V8 Supercars.”

Aunger believes Perkins will add a new element to the coverage this season:

“Not only is he a Sprintcar die-hard, but he’s quite an established TV announcer for a number of motorsport categories,” he said.“Jack will bring V8 Supercar credibility and a broad motorsport knowledge to our coverage.”

World Series Sprintcars is due to make another major announcement later this week before the Series begins at Adelaide’s Speedway City on Boxing Night.