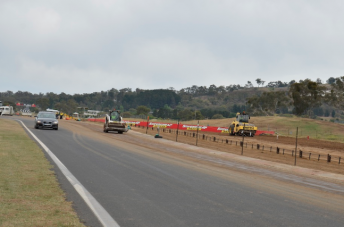 Key safety upgrades to the iconic Mount Panorama circuit have commenced as one of the world’s most critically acclaimed tracks prepares for its 75th anniversary celebrations in 2013.

A complete redesign of the earth-filled tyre barrier near the Armor All Bridge at the exit of The Chase is well underway.

The tyre barrier has been responsible for some massive accidents with several cars collecting the wall head-on.

One of the most dramatic which played out on television involved Kiwi Paul Radisich who had to be extracted from the roof his heavily damaged Team Kiwi Racing Commodore in 2006.

The Bathurst Regional Council and the federal government have thrown a combined $6 million in funds at circuit improvements with Canberra contributing $3 million under the Regional Development Australia Fund.

At the direction of CAMS (Confederation of Australian Motor Sport), the angle of the new wall is being changed so that it no longer presents competitors with the prospect of facing a head-on accident.

Other upgrades earmarked for the famous 6.213km track include a include a complete resurface and one of the biggest visual changes will be the addition of catch-fencing along the pit straight which many safety advocates have championed for over the years.

In terms of other areas of the circuit there will be improvements to disabled access at Harris Park while a new roundabout will be built at the entrance of the circuit.

These will all be either continued or started during a massive year of celebrations in 2013.

A lot of motor racing history has been created at Mount Panorama in the ensuing years since Yorkshireman Peter Whitehead stormed to victory on a dirt surface in his ERA (English Racing Automobiles) to win the 1938 edition of the Australian Grand Prix.

These upgrades to what is regarded by many as the pantheon of Australian motor racing comes as another internationally renowned Australian track, Phillip Island, undergoes much-needed resurfacing work to its entire 4.445km layout.