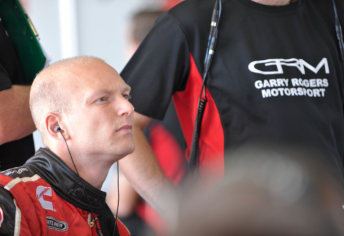 Garry Rogers Motorsport’s management says it will not rush a decision on its second driver for next year.

The Fujitsu-backed V8 Supercars squad announced on Friday that it has secured the services of Dunlop Series champion Scott McLaughlin for next year, replacing Nissan-bound Michael Caruso.

While one driver is locked in, GRM has remained uncommitted on its second steerer.

Current driver Alexandre Premat told Speedcafe.com recently that he has a three-year contract with the team to remain in the #33 Fujitsu Commodore, however, performance clauses may give GRM cause to cease the relationship.

After a disappointing start to the year, Premat turned around his form at the end of the season, running inside the top five in Sydney until falling foul of the oppressive heat.

Premat shared seat time with new signing McLaughlin at Winton yesterday, driving the team’s one and only Car of the Future chassis.

While the end of the year is fast approaching, GRM team manager Pierluigi Orsi says that a decision will not be rushed.

“We want to make the right decision because we have to be with them for at least a year,” Orsi told Speedcafe.com.

“Timelines on this are important. it would be great if we knew now, but ultimately, we need to make the right decision.”

Orsi says that Premat’s appearance at the post-season COTF test was not a ‘final chance’ test, stating that he and Rogers have already seen what the Frenchman is capable of.

“We’re beyond the stage of showing what he can do. I think we’re all pretty clear that he is without doubt extremely talented and very fast. We just need to iron out a few things and make sure that the decision we take is the right one in the long run,” he said.

“People seem to forget that he has never, ever stepped foot on any of these places, and he still has managed to show good speed.”