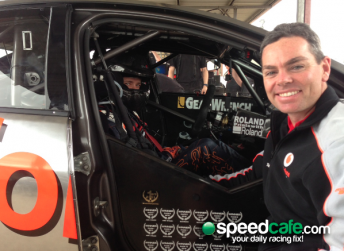 Casey Stoner is driving a Triple Eight Race Engineering Holden Commodore at Queensland Raceway today as he edges closer to a decision on his future in V8 Supercars.

The two-time MotoGP champion is being looked after at the test by Triple Eight’s Dunlop Series crew, under the guidance of the squad’s V8 Supercars Championship driver Craig Lowndes and team manager Adrian Burgess.

Before today, Stoner’s only V8 Supercars experience was at the Holden Driving Centre in Norwell, driving Triple Eight’s ride car.

After retiring from MotoGP at the end of this season, Stoner is yet to make a firm decision on his competition future.

While a Dunlop Series program with the champion team is becoming increasingly likely, team manager Burgess says that today’s test and evaluation is an opportunity to undertake a proper track test for the first time.

“He’s doing a great job at the moment and has acquitted himself well,” Burgess told Speecafe.com from the circuit.

“He’s in the 1 minute 11s after three runs. We’re going through a range of spring changes, bar adjustments and letting him feel what a real V8 Supercar is like with a proper engine.

“We haven’t turned it into a big 25 people ‘super test’. It’s a DVS (Development Series) style test, keeping it realistic for him.”

While Burgess insists the test is a low-key affair, he admits that today’s laps will give Stoner the best indication of if he wants to turn his racing focus to four wheels next year.

“It’s still to be decided (if he will compete in the Dunlop Series),” Burgess said.

“Prior to today, he’s only driven our ride car. This is the opportunity to drive the race car.

“Once today is over, he can go home and make a balanced, educated assessment of where he’s at and if he wants to do a deal.

“He has been to enough V8 Supercars and Dunlop Series races now to know the commitment that will be required.

“He’s had an incredible career in MotoGP, so we’re not putting him under any pressure. The ball is in his court, and what ever he decides to do, we’ll back him 100 percent.”

Triple Eight has competed in the Dunlop Series over the past two years. Andrew Thompson won the title in 2011, before V8 rookie Scott Pye took the reins this year, finishing second overall.

Pye is expected to be confirmed as a driver for Lucas Dumbrell Motorsport next year.

The first round of the Dunlop Series will be held at the Adelaide Parklands – supporting the Clipsal 500 – on February 28-March 3.