Schumacher returns to the track on two wheels

Schumacher returns to the track on two wheels 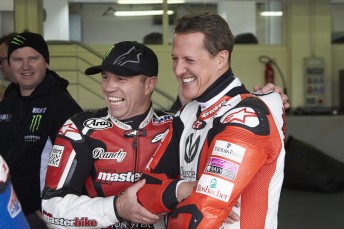 Michael Schumacher has wasted no time in getting back to the track after recently going into retirement for a second time.

The German enjoyed the chance of having a unique track day with some two-wheel superstars.

The special track day comes just a couple of weeks into Schumacher’s second crack at a grand prix retirement.

F1 overlord Bernie Ecclestone recently came out and said that Schumacher should never have made his comeback which netted one solitary podium finish.

The seven-times German F1 world champion has stood aside to make way from Lewis Hamilton’s defection from the McLaren team to move to Mercedes.

His motorcycling counterparts at Paul Ricard were remained in awe of the presence of grand prix racing’s most successful driver.

“Riding with Michael was so good. What he’s achieved on four wheels makes him the Godfather of motorsport,” a beaming McGuinness said.

“I wasn’t expecting him to be anything less, but he’s fast! You can see his enthusiasm for motorcycles and it was a massive pleasure to spend the day with him.”

Schumacher too was ecstatic at the chance to share the track on two-wheels with some motorcycling royalty.

“Coming here today I felt so proud to be able to turn my hand at riding a bike with guys I really admire. I can’t begin to explain how much fun it was to ride the track with the likes of John, Randy, Keith and watching Pol Espargaro’s huge talent,” Schumacher said.

Schumacher had tried his hand at motorcycle racing several years ago and bagged his first two-wheel podium at Hungary in 2009, a year before he returned to F1 after his 2006 retirement.