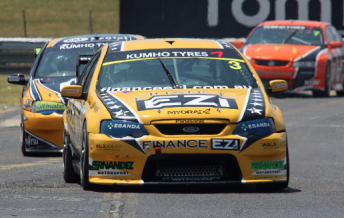 Young guns Andre Heimgartner and Josh Hunter are testing with Dick Johnson Racing today and are in the frame to compete with the team in its new Junior Development Program next year.

Heimgartner and Hunter are driving the Falcon that was raced by James Moffat in Norton colours during the second half of the 2012 season at Queensland Raceway.

The Falcon, the last Ford FG chassis built by Triple Eight Race Engineering, is destined to be part of DJR’s Junior Development Program, announced last month. The junior program will be run under the Finanze Ezi banner.

Kiwi Heimgartner has signalled his intentions to race in the Dunlop Series next year, but will only do it if he fails to secure a scholarship to drive in the Porsche Supercup next year.

Hunter, the grandson of speedway legend Garry Rush, won the Kumho V8 Touring Car Series this year and is eyeing a step up to the Dunlop Series.

As reported by Speedcafe.com recently, Hunter’s test with DJR today is likely to be the start of a long-term deal with the team, partly due to his alignment with DJR’s new partner Maurice Pickering from Finance Ezi.

DJR operations manager Scott Jennings says that a decision on who will drive for DJR’s two-car junior team will be made shortly.

“No one is locked in to drive for the team yet. No contracts are signed. We’re just giving them a run to see what they think and see what we think of them,” Jennings told Speedcafe.com.

“Obviously, we have to make sure our budgets are right. It will be a collective decision between Maurice, Dick and the team.